Was listening to Shashi Tharoor speak very eloquently on how the British looted India and about the atrocities committed. I have visited New Zealand and the United States, where the natives keep reminding the white people of the crimes perpetrated against them by early settlers.
The old grudges keep the divide open and festering, and works to great advantage by political leaders, who exploit the situation shouting, “Apologize!”
In our own country most political speeches carry reminders about Mughal invaders and English merchant cheats!
Such memories lay the foundation for all the atrocities committed today.
“Do you know what they did to my family?” shouts the young man whose great-great- grandfather was from Sind, and he goes on to relate to his children horror filled stories of the partition, sowing in them distrust for those of another faith.
And this distrust is milked by politicians to win seats.
I can imagine a divine experiment going awry as a God above watched his son being crucified to death, by cruel, barbaric earthlings. “How can they be so cruel?” God must have whispered as He saw His innocent Son, beaten, thrashed, nailed onto wooden planks, then dying from the loss of blood.
But..
..before He died that Man on the cross, shouted, “Father forgive them for they know not what they do!”
And in one single moment, retribution, revenge and retaliation was given a full stop!
That’s the full stop we need today.
—————————————–
Enrolled?
—————————————-
Our own Gandhiji said, “An eye for an eye will drive the whole world blind!”
And it’s towards blindness we are being led today, by these harbingers of hate! “Remember the Mughals!” they scream, and even if we don’t, we are fed with stories, that grasp a horrid past and are thrown into our peaceful present.
Today, on Good Friday, let us remember Christ, who even in the throes of the worst death ever possible, cries out telling His heavenly father, “Do not remember!”
It’s difficult. I remember inviting a few Germans home to dinner, and as we chatted, I nearly asked, “How did your fathers, the Nazis, ever kill the Jews in the gas chambers?”
But today, in forgiving Germany, that country is now one of the most compassionate countries in the world. Forgiveness works, nothing else does.
Author Philip Yancey talks about a man whose marriage was on the rocks, and who one night screamed in his home, “I won’t take it anymore. I’ve had enough, I hate you!” A few months later the man heard a sound, padded over to his two-year-old son’s door and heard the little fellow screaming with exact precision, ‘No! No! No! I’ve had enough, I hate you!”
Unforgiveness had passed on.
This Good Friday, forgive! Put a FULL STOP..!
———————————————
ENROLL…
…Get trained by the very person whose article you just read! Don’t wait! Send a thumbs up for details to 9892572883 and let Robert Clements train you in his easy and comfortable way Let the power of WORDS spoken and written effectively and forcefully, change your life! Join the Writer’s and Speaker’s Course, April Batch TODAY! Send a thumbsup to 9892572883 now!

5 thoughts on “Remember Good Friday, Not the Moghuls..!” 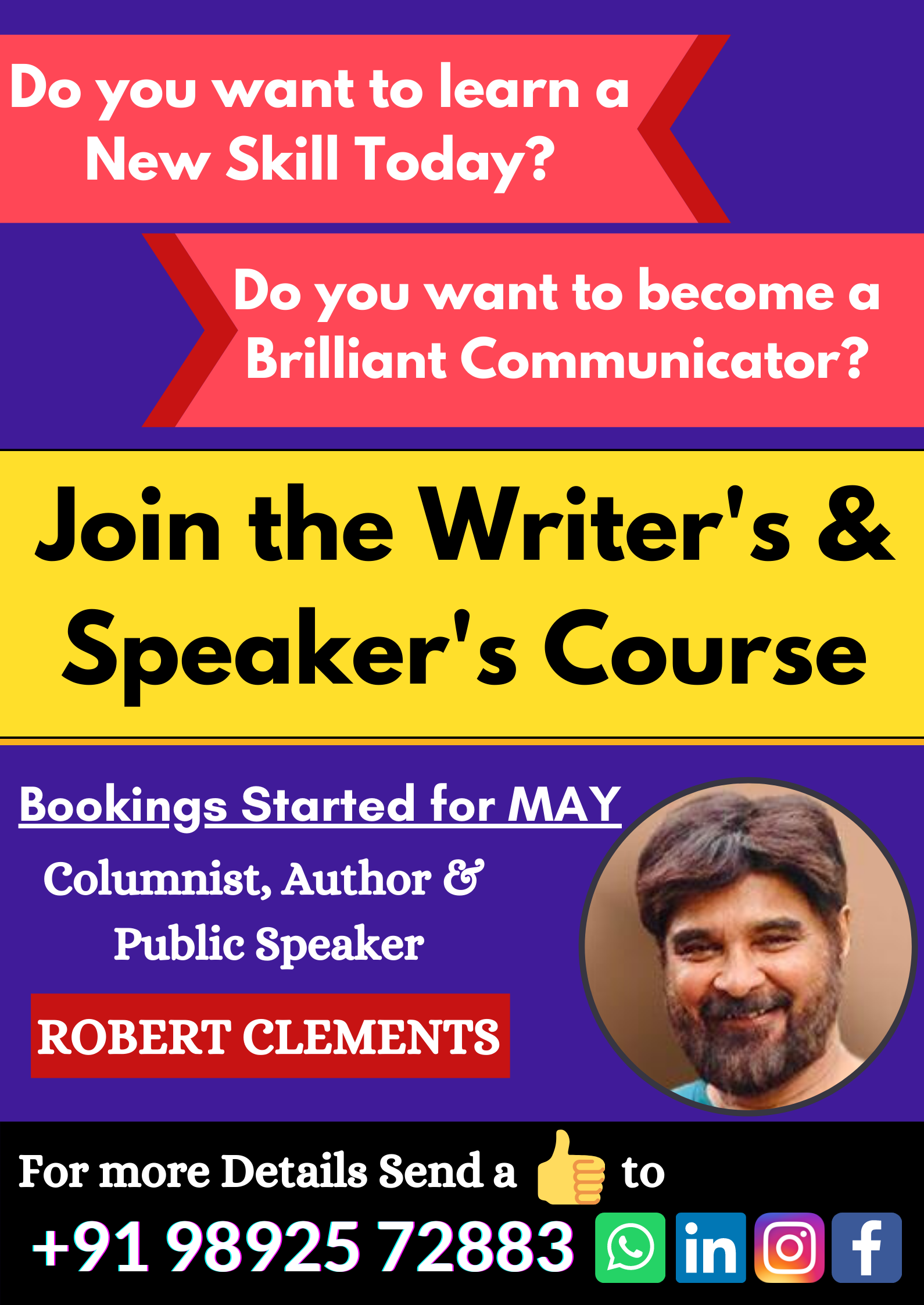